A great calamity has rolled over the face of the earth, flooding the planet and wiping out all but a few survivors. Those who managed to survive have colonised the waters, and as the oceans froze over, civilization rebuilt itself. Settlements, merchants, pirates. The years pass from season to season, and tales of what’s above the ice have turned to fables, nobody remembering a time before this.

We begin the tale with one bold captain on a journey for more. We also begin on rusty old submarine. Now that that’s out of the way, let’s cut to the chase: for a game about delving the deep trenches of the ocean, it remains rather shallow.

Diluvion is a loosely open-world exploration game played in third person. With FTL-like crew management, completely 3D movement, upgradeable vehicles and a whole lot of navigation, Diluvion has a Jules Verne-meets-Steampunk theme and a thalassophobia-inducing ocean playground, setting itself apart from the slew of other Kickstarter games released in recent times. The deep, dark ocean is absolutely terrifying, and peering down into the murky depths evokes a very real, primal fear. So often would I be puttering along, only to realise how lost and vulnerable I had become. Perhaps I do suffer from an irrational fear of large bodies of water. Perhaps I am scarred from some less than ideal diving trips with my father as a child. Still, no other game has given me such a sinking feeling in my gut. Absolute kudos.

In many ways I feel Diluvion strives to look great in trailers more than it wants to be a good game. Presentation-wise, it’s fantastic. Little fish spin and frolic around your ship, often leading the way to landmarks, submarine flora litters the ocean floor, and the icy-depths rarely feel boring with how unique various bits of ice, floor, and cavernous walls feel. It’s a game about navigation, and every little landmark stands out. The music is eerie when it needs to be, triumphant and glorious at others. When the focus shifts from 3D to 2D when visiting various towns, characters are interesting and colourful in a cute, pen-and-paper sketchy way. It’s got a lot of heart, and my gripes with actual gameplay feel somewhat diminished because the visual and audio design pulled me so far into its world.

It is too bad that, as much as I was drawn in, I was pushed away every moment thereafter. Diluvion is clumsy. As I mentioned, it has a heavy focus on navigation and finding your own way to each objective. While you are granted a map, it’s basically a blank canvas until you discover landmarks which are then jotted down for you to remember. This map is literally just that, a map. You don’t appear on the map, but instead have to use a compass and your own personal sense of direction. I would personally love this idea, forcing the player to truly explore and memorise routes… If only quests weren’t so directionless and vague. For example, one of the first tasks you are given is to hunt down a list of materials to upgrade your ship with. Easy, right? Not so much when you have the entire game-world to search with no nudges in the right direction. The frustration I felt when seeking out some of these quests points for five hours was only compounded when I tried to ask my crew where to go, to simply be met with “Yes, I know where that is! All of us in the Sonar Guild know where that is!” with no additional information provided. North? East? Maybe West? How about good old South? I feel a lot of the initial frustration with Diluvion would have been avoided if I at least knew which quadrant of the map to be in (or the ship didn’t crawl along at a sea-snail’s pace). 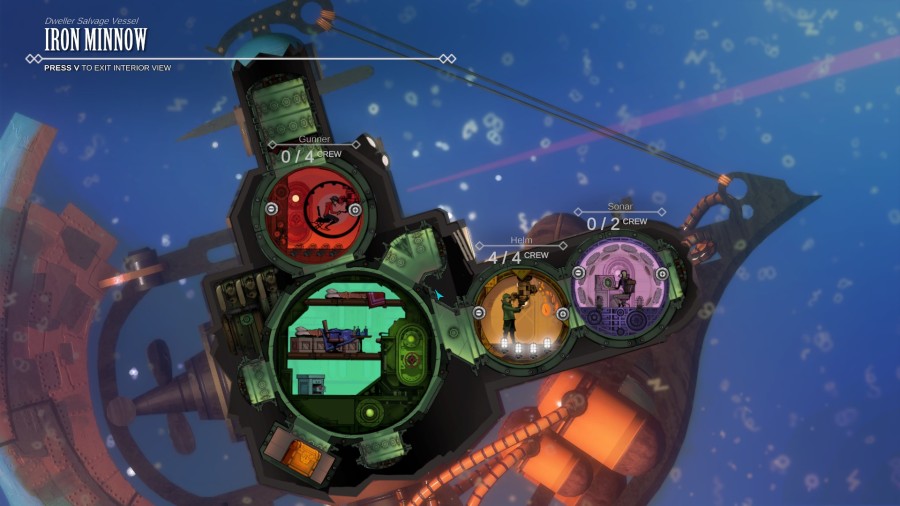 Diving on past the navigational issues, the moment to moment gameplay is a bit hit and miss. Scouring the ocean floor for shipwrecks, abandoned research modules and ancient relics provides a satisfying loop of discovery, looting, and vendoring. You don’t often find much of real value, although a potential crew member with high stats may be lurking in any particular shipwreck. Between these dives you’ll be managing air-tanks, food, and ammo (literally just scrap metal you sling out at pirates). Actual combat is an exercise in frustration, as pirates tend to hover about in the same spots, waiting to blast you away. At early stages of the game, you’ll likely die immediately if more than one enemy finds you at a time. At later stages, you hold the fire button and damage bad guys faster than they damage you. There’s some slight reaction time needed in avoiding or firing torpedos, but battles never felt like the core of the game. They felt more like annoying distractions which occasionally made me restart from 5 minutes in the other direction. For the most part, I slapped extra crew into the gunning and torpedo bays, increasing their rate of fire so I never had a problem. It’s just not exciting.

Control-wise — again, it’s a mixed bag. Slowing down the game and slipping into the 2D cut-out view to manage crew in different bays works a charm. You can then go back to aiming separately to movement, diving or rising while steering different directions seamlessly. Sometimes the sub will spin comically out of control as it tries to correct itself, and other times it will somehow flip over, ruining the immersion of being underwater. Often in combat I wasn’t able to take clear shots because my ship would continue to spin as I aimed, throwing off the crosshairs. Similarly, trying to dock with a base or another ship can be a nightmare. You’ll shoot hooks into the docking bay and attempt to pull in, but a fish sneezing 3 nautical miles away will break the link. There doesn’t seem to be any clear reason as to why docking won’t work at times, but it’s an exercise in frustration for the most part.

There are some loose RPG elements in what stats your crew bring to the table, and some loose base management, but the heart of the game truly is in the exploration. And exploring is good, albeit slow and cumbersome. The world-building within is interesting, and I want to know more, but it’s all so drawn out. New areas are exhilarating, and diving deeper and deeper as you upgrade your ship is thrilling. Watching the scenery darken, and being forced to rely on sonar pings to avoid crashing is a great idea, and when it works, it feels fantastic. When it works.

If Diluvion’s gameplay was tighter, with less frustrating meandering and more direction, even the most vague of directions, it’d be a sure-fire diamond in the rough. I understand that the developers wanted the player to take their own time, and I appreciate the effort made to encourage the player to explore. It’s just that there’s just too much time wasting in between. The lulls in gameplay are not exceeded by the thrills of exploration, with the excitement outweighed by the slow, unrelenting crawl the player goes through to get there. It’s a really neat experience… but not a fantastic game.

Disclosure: A copy of the game was provided by the publisher for review purposes.