If you’re a gamer that regularly keeps up with news or just occasionally watches or reads through top ten lists, you’ve no doubt heard of Shantae; the Game Boy Color game released a year after the Game Boy Advance came out. This alone destined it for obscurity despite the warm critical reception it received. Years later, due to the passion of fans and developers alike, there was a follow up on the DSi which was later released on iOS and then pretty much everywhere. This was followed by the original game being released on 3DS, another sequel in 2014 and the crowdfunded subject of this review finally releasing in December last year.

What immediately distinguishes Half-Genie Hero from its predecessors is the visuals. Shantae is now beautifully animated in a similar style to that used in the story scenes in the previous two entries. Though the pixel art used in the two sequels was some of the best you’ll see, it is really special to see Shantae moving (and dancing) in higher definition. The characters have also all seen a makeover with big detailed and colourful models that add a lot of personality to the game. 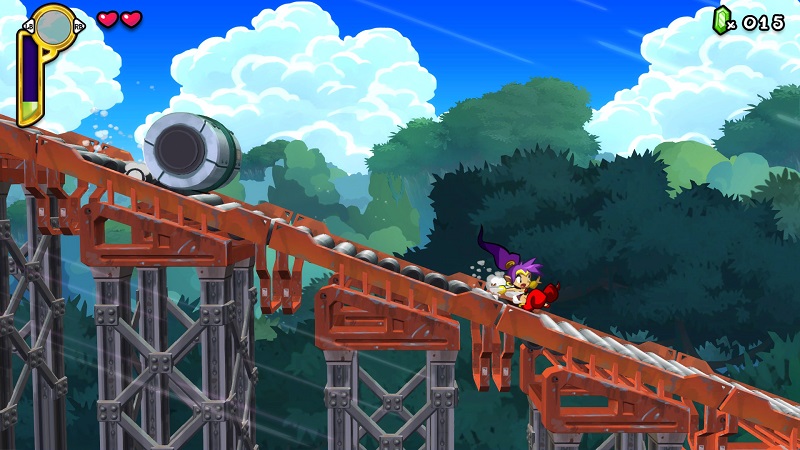 Complimenting the beautiful visuals is a fantastic soundtrack with series composer Jake Kaufman arguably outdoing himself. This is one of the most upbeat and energetic gaming soundtracks I’ve heard in years. It takes me back to the best platformers of the 90s but I also kept thinking there must be some influence from the Super Monkey Ball series. This is one I’ll be listening to down the road long after I’ve finished with the game.

The ability to transform into different animals and creatures from the first two entries returns in Half-Genie Hero. There are both new and old and are used cleverly to vary the gameplay and open up new areas of exploration. A big improvement from earlier games is the speed at which Shantae can perform these transformations. Previously you had to go through a dance animation but now a button press brings up a menu (played to a beat), which makes the changes much quicker. This can even be sped up further through an upgrade. Most of the changes operate how they did before but there are new ones that genuinely open up areas in ways that I couldn’t have imagined. One worth mentioning is the mouse which at first seemed like a minor gimmick but expanded some areas with mazes to explore and puzzles to solve. 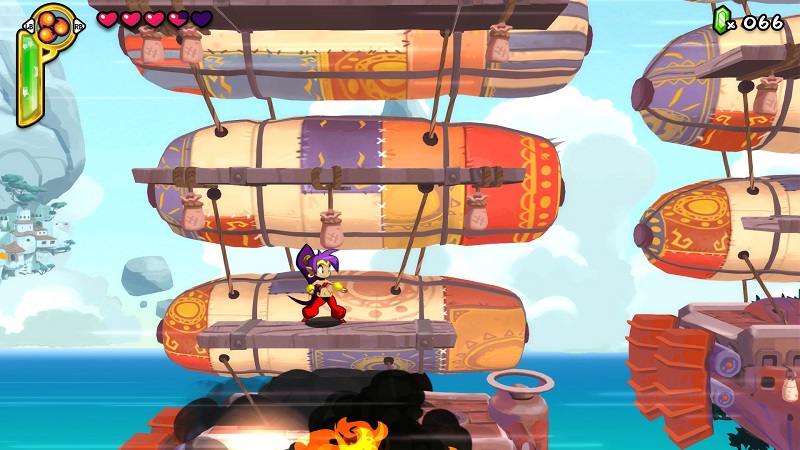 The platforming outside of the transformations is as solid as ever. Shantae has to race up a tower, slide down a conveyor belt, swim through water and fight through an armada of airships to share a few. To anyone who has played a fair share of platformers, these won’t seem revolutionary but all smartly designed and for me, struck the right note between challenge and frustration. What might disappoint fans of the franchise though is the way each area is now segmented rather than being part of one seamless world. While Shantae will still need to return to areas she has visited, the path there is made much easier with a travel mechanic and the warp dance. There is still a lot to explore and do in each area, but the world definitely seems smaller as a result.

Perhaps because of this streamlined approach, the game might feel short to series veterans. In my play time, I collected the vast majority of items with only a few shop items to go and completed the game with a time just over five hours. Another reason for this might be the way characters always point you in the right direction without any subtlety. There are optional speed-run challenges and a higher difficulty but the game is definitely short. In its defense, this is a game developed on a relatively modest budget and the length isn’t at all uncommon for the genre. I more put this in to curb the often lofty expectations that people have with projects like this. 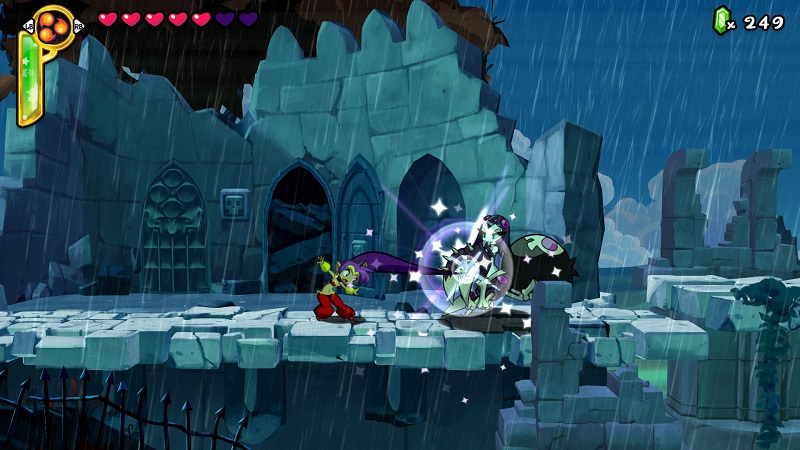 There was a considerably more notorious Kickstarter project released in 2016 with a much higher budget than Shantae: Half-Genie Hero. The contrast in quality could not be more stark. WayForward cannot possibly please everyone but if I had backed this (and I wish I had), I would have been very happy with the result. Fans of the series will not need my recommendation but anyone even remotely interested in platformers will get plenty of enjoyment out of this and there’s more on the way so you should…

Disclosure: I was provided a code by backer and Heroes of Play reader, Selenium. Thanks Sel!