When I tried to think of motorbike racing games before writing this review, I could think of only a few off the top of my head. There’s Nintendo’s Excitebike, Sega’s arcade efforts, Hang On and Manx TT Super Bike. Then there is EA’s sorely neglected Road Rash series. These titles date back from the 80s to the late 90s and I couldn’t think of any since. Indeed, I had to look to find anything relatively recent in the genre and all the recent games were developed by Italian developer, Milestone S.r.l. who have developed a number of MotoGP games and the subject of the review. This bodes very well for Ride 2 as it is relatively alone in the racing genre; especially because it’s a simulator.

Having no background knowledge of the developer’s previous efforts or the original Ride, I come to Ride 2 with fresh eyes. I also confess having very little knowledge of motorcycle racing or indeed any racing whether Formula One or in go-carts. So I ask the more knowledgeable reader to forgive this, especially with regard to technicalities.

Ride 2 includes close to 200 different motorcycles from a variety of manufacturers and builds. There are vintage models, sports bikes, supermoto and superbikes used in MotoGP. There are also a variety of tracks from around the world, though unfortunately not Australia. Each motorcycle model is nicely detailed and includes descriptions of the manufacturing history. There are also limited customisation options for each bike allowing upgrades to motors, exhaust and colour options too. These are nowhere near as robust as other games in the genre but they at least cover the basics.

The different bike types all handle differently and I found I had to adjust my play style to each bike type. In many racing games I play, crashing has little consequence outside of falling behind in the race. Even car damage is minimised. Something I learned very early in Ride 2 is that crashing happens easily and frequently if you’re careless. My first thirty minutes of the game were spent flying off bikes repeatedly. This is not just from direct crashes but also from losing balance around corners and especially in rainy weather conditions. Learning to keep your bike balanced and on track are necessary even on the lowest difficulty settings.

There are a large number of bikes as well as game modes available in Ride 2. The immediate problem is that most of it is locked away. You have immediate access to single races (Offline), online multiplayer and the “amateur seasonal events”. Many others including the “championships” need to be unlocked or require a type of bike you simply will not have. There is nothing unusual about locked content in a game of course but progression in Ride 2’s case is often painfully slow. You earn credits from winning events but the payout isn’t particularly high. To unlock championships, you require medals from seasonal events and this can take a very long time. There are also opportunities to earn bikes but you are limited at first. Even the DLC bikes need to be bought with in-game credits. To emphasise how tedious this is, there is a DLC Booster Pack available to make progression faster. 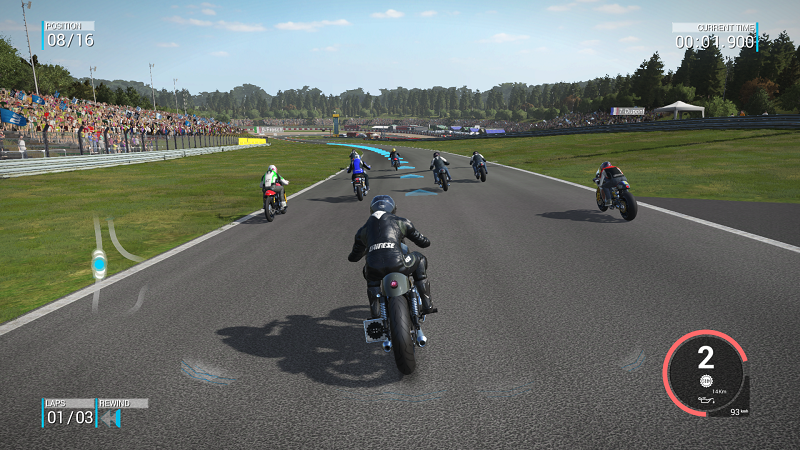 Once you have played a good number of races and have acquired a decent variety of bikes to use, Ride 2 becomes a lot more enjoyable but the period of tedium before getting there is completely unnecessary. Even then, you’ll still be spending a lot of time racing to get to the next milestone. There are modes with specific challenges like team races, drag races and time trials to add variety, but if like me you wanted to get straight into superbike racing, it will feel more like work than fun. I unfortunately don’t have anything to add about online play as I wasn’t able to get into a game after several attempts at searching.

As mentioned, the bikes are very well detailed and the in-race physics are excellent. This means the game excels where it needs to but outside of this the game is visually unimpressive. Most tracks look fine if you’re focus is mostly on the road, but if you stop and look around you’ll see an often surprising lack of detail. This is not so for all tracks but many are visually plain. One exception is a temple themed track in Japan which does a great job of capturing the look of a Japanese town. Along with this, the game also has long loading times, often across multiple screens which also adds to the problems with progression.

Ride 2 is not a game I can recommend unless you’re a big fan of motorcycle racing. For people looking for a racing experience, there are plenty of much better options and the way the progression system is designed means getting to the best parts of the game takes far too long. Ride 2 is an enjoyable game once you’re in control of a fast bike but there’s just too much to go through to get there.

Motorcycle enthusiasts will want to play but everyone else will